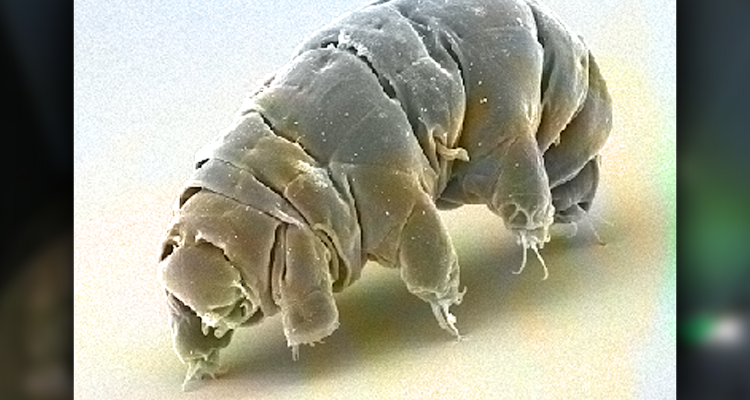 LARAMIE, Wyo. – Dinosaurs ruled these lands from 245 million to about 65 million years ago. You can see their fossils at the Wyoming Dinosaur Center in Thermopolis or take a look at Big Al, the Allosaurus at the Geological Museum on the University of Wyoming campus.

Living creatures being studied in a UW laboratory to glean secrets of toughness — and possibly stabilize medical biologics — have existed for 600 million years, making the rise, flourish and extinction of the dinosaurs a boring yawn in the passage of millennia for tardigrades, or “water bears.”

Molecular biology researcher Thomas Boothby, a UW assistant professor, and his colleagues are studying how the diminutive, less-than-half-a-millimeter-long creatures can survive being completely dried out; being frozen to just above absolute zero (about minus 458 degrees Fahrenheit, when all molecular motion stops); heated to more than 300 degrees Fahrenheit; irradiated several thousand times beyond what a human could withstand; and even survive the vacuum of outer space.

That Energizer pink bunny that keeps on going and going? Please …

“Despite them being discovered years ago, we really practically know nothing about these animals,” says Boothby, who joined the Department of Molecular Biology last year. “I’m excited about the fundamental discoveries we are making, but also how we can apply those to help solve societal and global health issues.”

The viability of biologics, or pharmaceuticals derived from living organisms, such as vaccines, is one of those issues. Vaccines are like Goldilocks. They’re highly picky.

“They’re highly effective medicines, but they do have one drawback, and that is they are very fragile,” Boothby says. “You need to keep most biologics within a very tight temperature window to keep them viable.”

A typical vaccine manufactured in the United States and shipped to, for example, sub-Saharan Africa and injected into a child’s arm, has to be maintained between 2-8 degrees Celsius (about 35 to 46 degrees Fahrenheit).

“Which for us doesn’t seem like that big of a deal,” he says. “But in remote or developing parts of the world where the electrical infrastructure is absent or extremely unreliable, it can be a huge economic and logistical burden to get these biologics to the people who need them.”

Boothby comments while sitting in the Animal Science/Molecular Biology Building on the UW campus, where an early June snowstorm triggered power outages that silenced laboratories and coolers.

There are terrestrial and aquatic tardigrades, but the land tardigrades are the most resilient. When sensing dry or other lethal conditions, they roll into a ball called a tun (pronounced ton) and wait until better times.

The normal lifespan of a tardigrade is about two months, Boothby says, but tardigrades can stay in suspended animation for years. Other creatures also can go into a suspended state but don’t have the survivability of tardigrades. Those creatures manufacture a protein called trehalose, a sugar, to survive freezing and lack of water. Tardigrades don’t appear to.

Boothby says biochemists are trying to understand how a protein that doesn’t have a defined shape can still perform defined functions.

“But we think it’s precisely this disordered nature that allows tardigrades to perform their protective functions,” he says.

Boothby suggests protection is conveyed through vitrification, the transformation of a substance into a glass. The waviness in old glass windows, such as in ages-old churches, is there because molecular motion is still occurring, as opposed to a crystalline solid, which is rigid.

The difference is profound in a cell. Sharp-edged, crystallized material in a cell can poke holes in membranes, shred DNA and disrupt other proteins, Boothby says.

A viscous, glass-like material is smoother and less rigid.

“That is essentially what happens when a tardigrade dries out,” he says. “They make more and more of the disordered proteins and fill their cells. The detrimental effects are slowed to the point where they don’t take place on a relevant time scale because the inside of the cell essentially turns into glass, freezing everything in place.”

Boothby points out that, over time, even a tardigrade will die in such a state, because just like old glass windows, the glasses inside of tardigrade cells still move — just very, very slowly.

He envisions taking tardigrade secrets and applying them to vaccines — even to dried blood.

“The vaccine still would be breaking down, but so slowly you could store it at room temperature,” he says. It would eventually lose its viability.

Boothby’s lab would like to understand the concepts well enough to apply the technology to whole blood, which is made up of many different types of cells.

“There’s an increased level of complexity where you need to protect every type of cell in the blood, but also protect how those cells communicate and coordinate with each other to make up the tissue we define as whole blood,” he says. “That’s one of the big projects we are working toward.”

Boothby’s lab is preparing an experiment to hitch a ride this fall on a SpaceX rocket for the International Space Station. That experiment will study if tardigrades cope with the stresses of space the same as on Earth.

Information about his laboratory, personnel and research is available at www.tboothby.weebly.com.