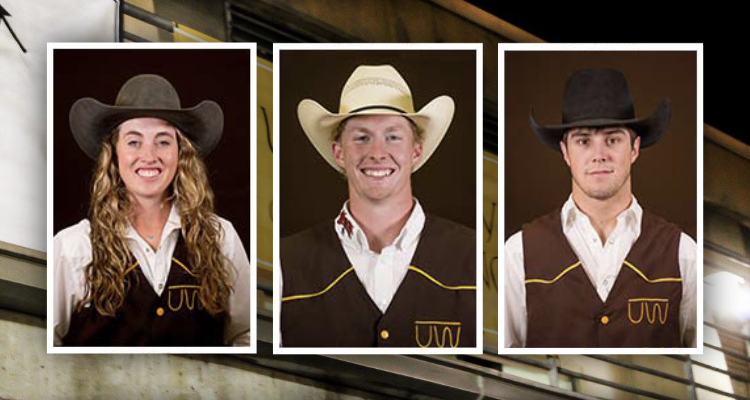 LARAMIE, Wyo. – With a week to go in the fall Central Rocky Mountain Region (CRMR) season, both University of Wyoming rodeo teams are the clear leaders in their respective divisions.

The Cowgirls picked up their third straight team title in Riverton Sunday afternoon, taking the Central Wyoming College (CWC) rodeo, while the Cowboys reeled off their second 800-plus point total win of the fall rodeo season with their second victory in three attempts.

With dual wins for the second time this season, the two-time defending CRMR champions appear to be the clear-cut favorites going into the spring season.

“It was a great team rodeo for us,” third-year Coach Beau Clark says.

He adds that many of the team’s athletes who did not place on the points teams had great runs and rides throughout the weekend.

“As proud as I am of the points that were scored, I am prouder of all of the students who showed great improvements this weekend,” Clark says. “This is the most fun team I have been around, and it includes all 52 team members.”

With just the Lamar (Colo.) Community College rodeo left this weekend, the Cowgirls and Cowboys have opened sizeable leads this fall.

The UW women have accumulated 1,075 team points through three rodeos — a 690-point lead over second-place Chadron State College (CSC), which has 385 points on the season. A distant third is Colorado State University (CSU) with 330, and perennial contender Gillette College is fourth with 200.

Just a week ago, Casper College had narrowed the seasonlong gap to just 125 points to the front-running UW men, but the Cowboys responded in a big way at the CWC rodeo to break open a commanding 675-point lead over the new second-place team — Gillette College. The Pokes now have 2,390 points for the fall season, while the Pronghorns have 1,615 points. Third is Casper College with 1,430 points, and fourth is CSC with 1,066.

For the second straight week, UW’s Faith Hoffman was perfect in the women’s goat tying event, posting the long and short go rounds’ top times to win the average. The Kiowa, Colo., Cowgirl scored a perfect 180 points to lead a trio of Cowgirls in the event.

Hoffman is the region’s top goat tier, and running behind her is teammate Taylour Latham, of Lapoint, Utah. Latham was fourth in the goat tying average at CWC, while one place back was teammate Kelsey Lensegrav. The Interior, S.D., Cowgirl added an additional 30 points in barrel racing to round out the team’s scoring.

The Cowgirls put up 375 points in Riverton over the weekend to take the women’s team title, while the CSU women were second with 150, and third went to CSC with 140 points.

The Cowboys went over the 800-point mark for the second time this fall, posting 835 points at the CWC rodeo — just 30 points off the school record set by the Pokes in the opening rodeo three weekends ago.

— Seth Peterson, of Minot, N.D., moved into second place in the CRMR tie-down roping competition when he won the opening round of his specialty event, while adding second in the short go for the average win.

— Jase Staudt, of Nathrop, Colo., and partner JC Flake, from Gillette College, had the second-best time in the long go and turned around to win the short go and the team roping average. Staudt and Flake are splitting first in the overall regional team roping standings.

— Garrett Uptain, of Craig, Colo., turned in the top mark in the saddle bronc short go to give him the win in the average. Uptain is sitting third in the region.

Gillette College placed second behind the Cowboys at CWC with 510 points, and third went to Laramie County Community College with 420 points.