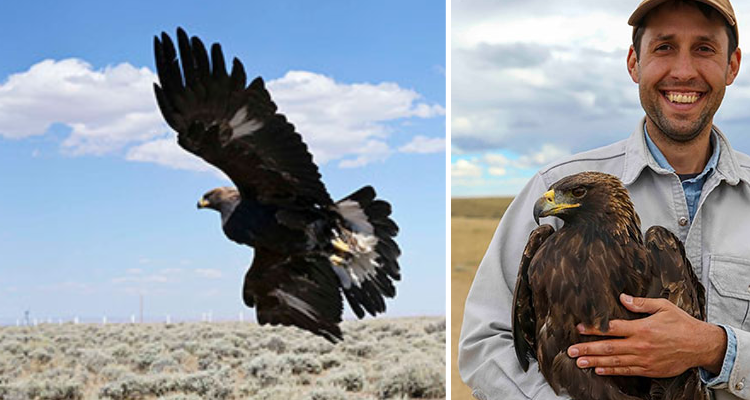 LARAMIE, Wyo.  –  A University of Wyoming scientist has helped establish roadmaps for conservation of the golden eagle across most of Wyoming and parts of surrounding states.

Zach Wallace, a research scientist with UW’s Wyoming Natural Diversity Database, is the lead author of one conservation planning document and the second author of another for the U.S. Fish and Wildlife Service’s Western Golden Eagle Team (WGET). The reports synthesize available science on the iconic raptor species in the Wyoming and Uinta basins and Northwestern Great Plains regions. They provide detailed risk assessments and management recommendations to help eagle populations coexist with conventional and renewable energy development.

“These regions support large and productive nesting populations of golden eagles, along with providing key habitat for dispersing young and migrating eagles,” Wallace says. “Our conservation strategies are intended to complement state and regional management plans by providing new conservation planning tools and best available information to help assure a future for these majestic birds in this part of the country.”

The Fish and Wildlife Service established the WGET in 2013 in response to concerns about the impact of wind energy and other development on eagles, which are protected under the federal Bald and Golden Eagle Protection Act. Golden eagles are vulnerable to collisions with wind turbine blades, and other threats include electrocution and collisions with power lines; collisions with vehicles; oil and gas development; conversion of rangelands to croplands; and lead poisoning due to ingestion of bullet fragments by eagles scavenging on animals killed by hunters.

Data analyzed by the Fish and Wildlife Service show that the population of golden eagles generally has been stable in the western U.S. over the past 45 years. However, some models suggest that current levels of human-caused mortality could result in a population decline.

The new conservation planning documents note that Wyoming is among the areas of North America with the greatest potential for on-shore wind energy development. The reports include maps showing models of golden eagle habitat overlaid with prime areas for wind energy development, to help identify where management actions can be most effective. Management recommendations to reduce mortality of eagles from striking turbines include:

— Install turbines in portions of project areas with lower eagle use.

— Curtail turbines when eagles are nearby.

“Given projected increases in development of wind power resources in Wyoming by an order of magnitude over the next decade, effective avoidance and mitigation of turbine-strike mortalities will be critical to maintaining golden eagle populations in the region,” the report says.

Other recommendations to conserve golden eagles include:

— Implement voluntary incentive programs to encourage use of non-lead ammunition by hunters.

“We are lucky to live in a region that is arguably the most important golden eagle habitat in North America, and that comes with the responsibility to understand and mitigate the effects of our actions on this species,” Wallace says. “The conservation strategies pair a toolbox of proactive conservation measures with spatially explicit risk maps to help target management actions where they will have the greatest positive impact. We hope this information will be useful to all the stakeholders in eagle conservation in the region — from government agencies to industries to nongovernmental organizations.”

The golden eagle conservation strategy for the Wyoming and Uinta basins region — covering most of Wyoming and parts of Utah, Colorado, Idaho and Montana — is available at https://ecos.fws.gov/ServCat/Reference/Profile/98137. Wallace is the lead author.