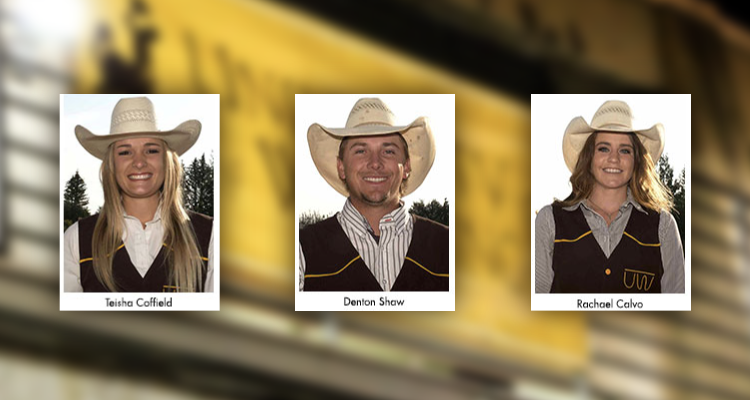 CHADRON, NE.    –     The University of Wyoming’s rodeo season got off to an impressive start when both the Cowboys and Cowgirls squads swept their respective team titles at the opening competition last weekend in Chadron, Neb.

The Cowboys, coming off a disappointing season in which they finished in the middle of the regional pack, scored a whopping 580 points to easily capture the first of five fall Central Rocky Mountain Region (CRMR) rodeos, hosted by Chadron State College. Central Wyoming College (CWC) was a distant second with 450 points, while perennial regional power Gillette College placed third with 400. Two-time CRMR champion Sheridan College was sixth with 205 points.

Coming off two straight seasons in which they have been among the top three teams in the region, the Cowgirls got off to a fast start in winning with 420 points, also enjoying a triple-figure victory margin over the second-place team. Northeastern Junior College (Sterling, Colo.) was second, 100 points back behind the UW women, while Casper College was third with 215 points. Gillette College, which has dominated the CRMR the last several years, was a distant sixth with 120.

“We had a good weekend, no doubt about that,” says UW Coach Beau Clark, who made his debut leading the university’s rodeo program. “We have a lot of good kids. Even the kids who are not on the points team contributed; it shows we have a lot of depth on both teams.”

The Pokes scored their points in half of the men’s six events, with the bulk coming in steer wrestling. However, the lone event win for the points team came from team roper Denton Shaw, a returning college finals competitor.

Shaw, from Lusk, competing this season with a new partner, scored 150 points for the Cowboys when he and Cooper White, of Gillette College, put together two solid rounds to win the average.

The Cowboys showed their depth in tie down roping when three Pokes took the third through fifth places. The trio of Seth Peterson, JC Flake and Jase Staudt combined for 220 team points. Peterson is from Minot, N.D.; Flake, from Mesa, Ariz.; and Staudt, from Nathrop, Colo.

All six UW team members contributed to the Pokes’ output during the weekend.

Ty Everson, from Helena, Mont., combined with partner Kaden Lappe, of Laramie County Community College, to place second in team roping. And Caden Camp, from Belgrade, Mont., placed fourth in the steer wrestling average in his first collegiate start for the Cowboys.

Three other UW competitors placed during the weekend, but their points did not count on the team’s official scoring. Gage Greer, from Gillette, won the steer wrestling competition; Queensland, Australia, native Kolt Ferguson split second place in saddle bronc riding; and Laramie’s Justin Dory was fifth in the same event.

Returning veteran Rachael Calvo and transfer Teisha Coffield powered the UW women to the team title when the pair both won their respective events.

Calvo, from Bassett, Neb., was third in both rounds of barrel racing, but her time totals were good enough to win the average.

Coffield, the reigning breakaway roping champion last season for the University of Colorado-Pueblo, was good in her Cowgirl debut with two strong rounds to take the average. She is from Yuma, Colo.

The Cowgirls also received points from two other members of UW’s four-woman team.

UW’s Lyndi Anderson, of Billings, Mont., scored points in breakaway roping, and Carly Hibbs, from Prineville, Ore., placed in goat tying. They were not on the Cowgirls’ points team.

The UW teams are back in action this weekend at the Sheridan College rodeo.