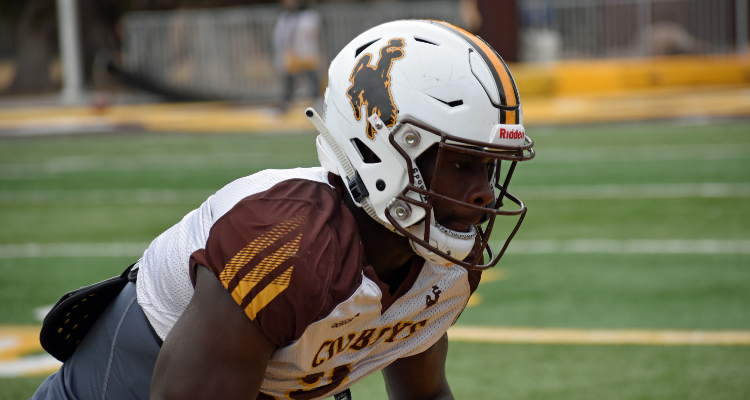 Laramie, WY. – After a successful scrimmage in Casper, Wyo., last Saturday, the University of Wyoming Football team returned to Laramie to practice in War Memorial Stadium on Tuesday, beginning the fourth of five weeks of Spring Drills. Head coach Craig Bohl said that after watching the tape from last Saturday’s scrimmage he was encouraged by the performance of the Cowboy offensive line, particularly in the running game, and the Poke safeties.

“The offensive line is maybe a little bit further along that what we thought,” said Bohl. “During the scrimmage, I felt like the offensive line was playing well, but after watching the film I was really pleased with their performance. I thought the running backs ran the ball pretty hard, but the biggest thing I noticed was that the offensive line is really beginning to come around in run blocking.

“I thought our safeties tackled extremely well. You might have a guy who looks good in practice but until they have an opportunity to make a play in open space in a game-like setting you don’t really know. That was good to see. Braden Smith and a couple other guys really answered the bell. It was great having Alijah (Halliburton) back.

“We were about where I thought we would be with the quarterbacks. It was maybe Sean’s (Chambers) worse performance of spring. Tyler (Vander Waal) did some good things but then had one really poor throw, so we’ve got to get that straightened out.”

Scrimmage in Casper a Success On and Off the Field
The Pokes first full scrimmage last Saturday was a success on the field in that it allowed Bohl and his coaching staff to evaluate numerous young players on the Wyoming roster. Off the field, it was a success in attracting a large crowd of Cowboy fans, and those fans also donated a large amount of food to Wyoming Food for Thought in Casper.

A total of 2,064 food items were donated by fans at the scrimmage. Each fan who donated a food item received a ticket for a free Pepsi product. Wyoming Food for Thought handed out approximately 1,200 of those tickets for Pepsi products. Pepsi donated 80 cases of Pepsi product for the scrimmage, which totaled 1,920 individual drinks.

Following the scrimmage, the Cowboys stayed on the field to talk with fans, sign autographs and take photos for about 45 minutes.

Bohl Encouraged About the Leadership and Direction of His 2019 Cowboy Team
When asked on Tuesday how he viewed the leadership of this year’s team Bohl replied, “I think it’s emerging. We’re starting to find out what guys are really seeing themselves as leaders and how the other people are following. That’s been encouraging. I like the trajectory of this football team, and I like the trajectory of the leadership.”

Updates From Tuesday’s Practice
A senior who continues to impress this spring is senior place-kicker and All-America candidate Cooper Rothe, who Bohl once again spoke about on Tuesday.

“I think the first thing is his (Rothe’s) leg is stronger,” said Bohl. “He’s really worked hard. We videotape a lot of things, and Cooper watches that tape and self corrects a lot of things. We try to place him in situations, so that he can continue to analyze his kicking motion. He’s kicking the ball further, and I actually think he’s more accurate. We did a pre-practice set today, and I think he was 100 percent and he hit a 53-yarder here at the tail end of practice. He was one of three finalists for the Lou Groza Award last year. I know he’s going to come into this season with a lot of people looking at his skill set. It was certainly great to have him last year, and we’re looking forward to working with him this next year.”

Due to continued injuries on the offensive line, sophomore Keegan Cryder was moved back to center in Tuesday’s practice after taking most of his reps at right tackle last week. Fellow sophomore center Patrick Arnold did not participate in Tuesday’s practice due to injury. Bohl said he hoped to get more information on Arnold’s status in the next few days, but he thought Arnold might miss the rest of spring drills. Redshirt freshman offensive guard Zach Watts was in street clothes at practice. Bohl said that unfortunately he thought Watts would be out for a long time. Bohl added that senior cornerback Tyler Hall is in concussion protocol, and junior nose tackle Javaree Jackson is missing practice due to an issue with his shoulder and neck area.

In regard to how the series of injuries has affected spring practice, Bohl said, “We’ve been able to get a pretty good evaluation so far with the number of reps we’ve got in practice and being able to analyze those reps. The scrimmage (last Saturday) was a pretty lengthy scrimmage, and this will be another important one coming up but we’re kind of getting to the razor’s edge. Our injury report is probably as long as what I can ever remember it, but we’re going to continue to make do with what we have. We’ve got a lot of hard work to do this week and the more guys we have out on the field the better off we’re going to be.”

The Cowboys will return to practice on Thursday, April 18th. Only one more of the upcoming Srimmages will be open to the public, on Saturday, April 27th, at the Spring Game at War Memorial Stadium.