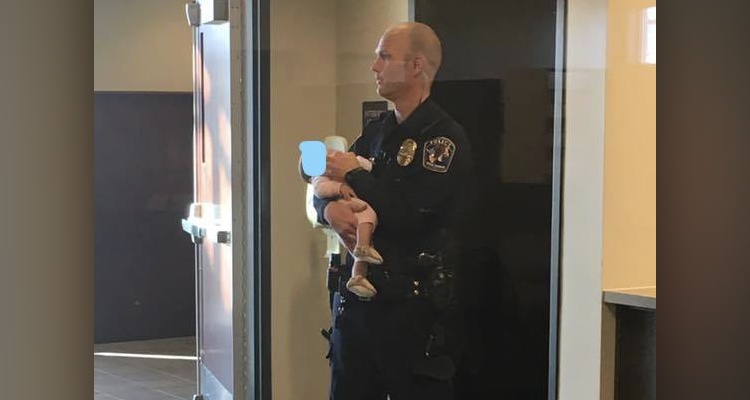 WEST JORDAN, UT. – Police officers protect and serve the public daily, often in both mundane and outstanding ways. Sometimes in cases involving domestic issues, they even help victims to find shelters, or help by transporting kids to safety. But a West Jordan Police officer is getting a lot more attention and praise of late, after photos were posted to social media showing him stepping in to help by holding a young mother’s baby.

Officer Robert Lofgran happened to be standing nearby when a young mother and her children entered the station earlier this month, to file a domestic violence report. As the mother filled out the report, Officer Lofgran offered to hold her baby and look after her other kids for several hours.

On-duty station clerks were touched by Lofgran’s actions, and snapped several photos of Lofgran holding the baby and posted them to the police department’s Facebook page.

The post describes how the officer’s impromptu act gave the mother the help she needed for that day.

The post reads, “A young mother came in with her small children to file a domestic violence report. Officer a Lofgran helped watch over the children while this mother got the help she needed for that day. He spent hours on this call.”

The post has garnered positive reactions from nearly 4,000 people and has been shared close to 600 times.

Sgt. Alex Earelli told Canadian television station CTV, that police officers step in like this “more often than would get broadcasted.”

“I wouldn’t say it’s every single day, but it’s often where officers do step in to try and help out with providing any type of resource so the parents or the victims can get assistance,” he said.