The unquiet spirits, vampires and the omnipresent zombies that take over American streets every October 31 may think Halloween is all about spooky fun. But what Halloween masqueraders may not realize is that in the early 1970s and well into the next decade, real fear took over.

The media, police departments and politicians began to tell a new kind of Halloween horror story – about poisoned candy.

No actual events explained this fear: It was driven by social and cultural anxieties. And there is a lesson in that about the power of rumors on this day of dark fantasy.

The Halloween candy scare began in 1970. An op-ed on Oct. 28, 1970, in The New York Times suggested the possibility of strangers using Halloween’s “trick-or treat” tradition to poison children.

The editorial mentioned two unconfirmed incidents in upstate New York and offered a series of frightening rhetorical questions. The author, Judy Klemesrud, wondered, for example, if that “plump red apple” from the “kindly old lady down the block…may have a razor blade hidden inside.”

Some readers accepted her questions as definitive fact.

Two days later, a five-year-old child died on Halloween in Detroit after consuming heroin. Early media reports of his death cited his uncle’s claim that he had been exposed to the drug in tainted holiday treats.

By mid-November 1970, newspaper reportage showed that the child had in fact found the heroin at his uncle’s home – not in his bag of Halloween candy, as investigators had at first been told.

But on Oct. 31, 1974, another child died in Houston. This time, the death was a result of eating poisoned candy: The child’s father had murdered his own son by placing cyanide in a pixie stick.

This story of the Houston “candyman killer” quickly metastasized. Though it had no evidence, Newsweek magazine asserted in a 1975 article that “over the past several years, several children have died and hundreds have narrowly escaped injury from razor blades, sewing needles and shards of glass put into their goodies by adults.”

By the 1980s, some communities banned “trick-or-treating” while hospitals in some metropolitan areas offered to X-ray Halloween candy. Parent-teacher associations encouraged fall festivals to replace Halloween, and on Long Island a community group gave prizes to children who stayed home altogether for Halloween 1982.

In 1982 the governor of New Jersey signed a bill requiring a jail term for those tampering with candy.

Worries of parents and community leaders drove the fear. In a popular nationally syndicated newspaper advice column called “Ask Ann Landers,” Landers warned in 1983 of “twisted strangers” who had been “putting razor blades and poison in taffy apples and other Halloween candy.”

However, a comprehensive 1985 study of the of 30 years of alleged poisoning did not find even a single confirmed incident of a child’s death, or even serious injury.

Sociologist Joel Best at the University of Delaware, who led the study, called it an “urban legend.” Most reports of poisoned Halloween candy that appeared in print were editorials written by authoritative voices in politics and media rather than actual events. However, police all over the country urged parents to accompany their children while trick-or-treating. In 1982, annual Halloween festivities at the governor’s mansion in Hartford, Connecticut were canceled.

Why did a series of rumors, very loosely based on a a small number of tragic crimes, convince so many people in authority and led to such panic?

In his book “The Vanishing Hitchhiker,” folklorist Jan Harold Brunvand argues that while urban legends may be grounded in actual incidents, they often come to stand in for real-world fears.

In the case of poisoned candy, my own research into American politics and horror tales suggests that those fears might have been driven in part by the multitude of problems facing the United States at the time. The years from 1970 to 1975 were marked by cultural upheaval, both domestic and geopolitical.

In 1974, President Richard Nixon resigned following the Watergate scandal. The scandal exposed the abuse of power and a criminal cover-up under his administration.

Americans had much more to worry about than Watergate in the mid-1970s. Scholar of the Vietnam era Christian G. Appy, in his 2015 book “American Reckoning,” described the era as one in which defeat in Vietnam combined with “stagnant economic growth and soaring inflation” caused many Americans to see the country itself as “a victim of forces beyond its control.” This sense of victimization drove the sense that American society had become deeply unsafe. 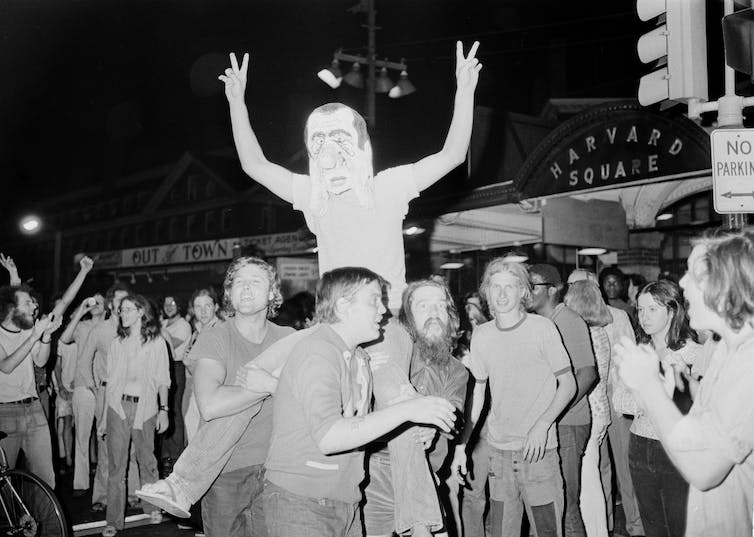 Young people in the streets of Harvard Square, with one of them wearing a President Nixon mask, after he resigned.
AP Photo/Peter Bregg

All the social change in the 1970s fed the creation of urban legends, argues sociologist Jefferey S. Victor. A brutal story about strangers with poison candy seemed a preferable national fantasy to historical reality in the 1970s and 1980s.

Horror at the state of the world can take the form of parody or simple scary stories. Americans had become so disenchanted, according to the journalist and historian Rick Perlstein, that bleak and frightening films such as 1974’s “The Exorcist” captured the the national mood.

The false case of the poisoned candy legend is another way that American fears manifested: as an easily understood threat to innocence.

Scholar David J. Skal in his book, “Death Makes a Holiday,” argues Halloween, throughout its history, has provided a moment for people to unleash their political and cultural fears. As an example, Skal notes, Richard Nixon became the first president satirized by a rubber Halloween mask in the autumn of 1974, just two months after his resignation.

Today a majority of Americans, of all ages, see Halloween as an opportunity to celebrate excess, a kind of a dark Mardi Gras.

But some Christian churches, especially those attended by conservative evangelicals, continue to declare a kind of “war on Halloween” every year. Many evangelicals, in their own description, see the holiday as a celebration of the occult, often viewed in their religious worldview as connected to a very literal Satan.

Halloween, with its association with the powers of darkness, can allow many legends to flourish – tales of dangerous outsiders, poisoned candy and other alleged threats to American life.

Social media may serve that role the rest of the year. But on Halloween, dark rumors may actually knock at the door.