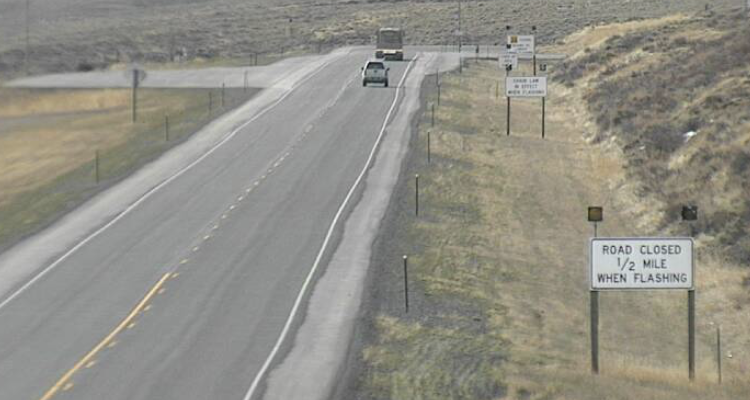 Lander, WY.   –   An observant Wyoming Department of Transportation maintenance employee saw tire tracks and a hole in the fence along WYO 28 south of Lander Tuesday, eventually leading to the rescue of a Fort Washakie woman.

Candice Tindall, 25, of Fort Washakie, was extricated from her crashed vehicle by Fremont County fire and emergency services personnel after they were dispatched to the scene by South Pass WYDOT workers. She was life-flighted to the University of Utah Hospital in Salt Lake City with an assortment of non-life threatening injuries, according to Wyoming Highway Patrol Trooper Daniel Eggli of Lander.

“EMS crews and firefighters removed Tindall from the vehicle and carried her on a backboard the rest of the way down the hill to an awaiting deputy sheriff’s vehicle, and she was slowly driven up a two-track road to an awaiting ambulance,” Eggli said.

Tindall was trapped inside her vehicle for more than 10 hours. And luckily, the keen eye of a WYDOT worker spotted the tire tracks and the hole in the right-of-way fence, according to South Pass maintenance foreman Mike Hitshew.

The crash site is locally known as Johnny Lee’s Corner, six miles south of WYO 28’s junction with US 287 (Rawlins Junction), and about 20 miles south of Lander.

WYDOT South Pass maintenance worker Todd Long had attended an all-employees’ meeting Tuesday morning in Riverton. He was returning to the South Pass camp Tuesday afternoon driving a tractor-trailer combination with a load of salt brine. When Long saw the hole in the fence and tire tracks, he notified WYDOT’s radio dispatch center in Cheyenne.

WYDOT South Pass workers James McLean and Jake Small responded and found the vehicle. “It looked as if the car had rolled several times over the embankment,” Hitshew said. “The driver was inside the vehicle, and she was waving at our guys. Small ran to the vehicle, and found the driver (Tindall) pinned inside. McLean radioed for help. Everyone worked together to save a life.”

“We have to thank Todd Long for notifying others about the fence issue, and McLean and Small for reacting to what was out there. There’s a real possibility that if Long wouldn’t have seen the hole in the fence, we might not have found the crash on Tuesday. We’re all thankful she was found,” Hitshew said. “We had driven by the crash location about 9 a.m. Tuesday on our way to Riverton, but I doubt we would have ever seen the hole in the fence as we were driving north.”

Eggli said Thursday the exact cause of the crash remains under investigation. “For an unknown reason, the driver was traveling westbound and left the roadway to the left, crossing the opposing lane at Johnny Lee’s Corner,” Eggli said. “The vehicle went through the right-of-way fence and down the hill until her vehicle hit a boulder. This slowed the vehicle almost to a stop and the vehicle came to rest just below the boulder.”

Eggli said evidence gathered after the crash and rescue suggests Tindall was not wearing a seat belt.

“It is possible Tindall was in the vehicle for approximately 10 hours,” Eggli said.