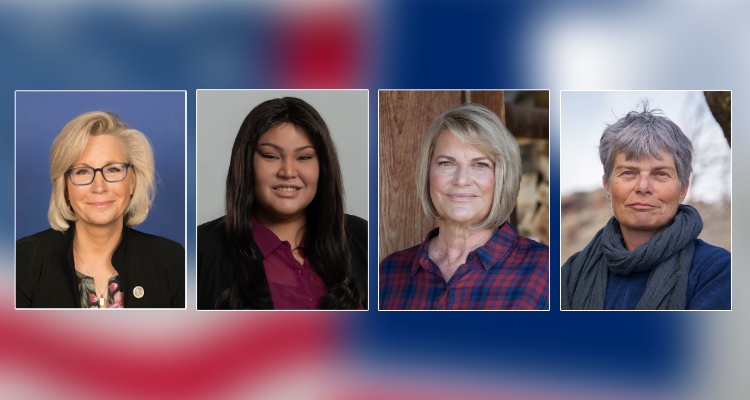 They sparred over the government’s role in addressing a range of issues — from the coronavirus to climate change — and Donald Trump’s record as president.

The Affordable Care Act enacted under Obama has been at risk from court challenges in the Trump administration, said Ben-David, a University of Wyoming ecology professor.

The act has done “a lot of good things for Americans,” Ben-David said.

“We had 20 million people that were uninsured. We had insurance companies that were refusing to insure people that had preexisting conditions,” Ben-David said.

Medical billing transparency and encouraging insurers to work across state lines are better than government health care for bringing down health care costs in rural states like Wyoming, countered Lummis, who was Wyoming’s lone U.S. representative from 2009-2017 and previously served as state treasurer and in the Legislature.

“Obamacare doesn’t work for Wyoming. It was designed for urban areas,” Lummis said.

A wildfire sending smoke over southeastern Wyoming prompted a question about the U.S. role in addressing climate change. The real problem, Lummis said, is that forests overseen by the federal government have been mismanaged and the U.S. Forest Service should look to states like Wyoming for good forest-management examples.

“I say we know how to manage forests better at the state level,” Lummis said.

Wyoming forests have indeed been mismanaged, she said, “to maximize logging companies’ revenue.” She supported rejoining the Paris Agreement climate accords from which the U.S. has withdrawn under Trump, Ben-David said.

Lummis praised federal tax cuts approved by Trump as a needed benefit for families, while Ben-David pointed to reports that Trump in recent years has paid just $750 in federal income taxes as a sign of problems with the U.S. tax code.

“We have so many loopholes that we don’t share the burden of taxes among all people in the United States. We need to address these if we are to face the challenges of the future,” Ben-David said.

The U.S. House candidates, debating later, were asked what could be done to help young adults get good-paying jobs in Wyoming. The economy under Trump was doing well and jobs were becoming more available before the coronavirus pandemic, Cheney said.

“It’s going to require defeating the virus and getting the economy going again,” said Cheney, a daughter of former Vice President Dick Cheney and a former State Department official.

Grey Bull, a Northern Arapaho tribal member, community organizer and vice president of the Global Indigenous Council, introduced herself as familiar with working-class challenges in Wyoming.

“For all the things we can worry about, let’s not lose sight of the things we hold near and dear: our liberties, which are the safeguard of our freedoms,” said Haggit.