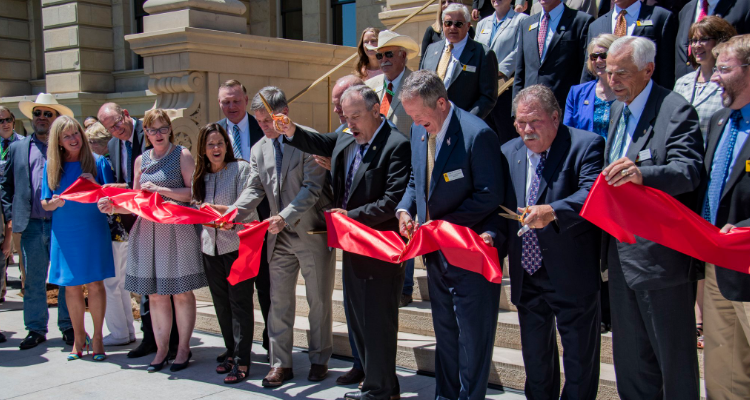 CHEYENNE, WY. | By MEAD GRUVER, (AP) — After a $300 million renovation taking three and a half years, the Wyoming Capitol and nearby state offices reopened Wednesday.

State leaders cut a red ribbon before the 132-year-old building opened up for the public to have a look at the elaborately painted halls, rooms and chambers, all restored to more closely resemble the building’s appearance over a century ago.

“You walked into this building with a sense of pride, a sense of obligation and a sense of duty to the people of Wyoming that cannot be expressed,” Gov. Mark Gordon told a crowd of a couple thousand. “It is so good, so good, to be back.”

Police closed off streets in front of the Capitol during the event, for what may have been the last significant disruption associated with the project.

During the work, several state agencies and the offices of Wyoming’s top elected officials moved into temporary offices scattered around Cheyenne. Gordon and his predecessor, Matt Mead, worked out of a former funeral parlor just across 24th Street from the Capitol.

State lawmakers met for four legislative sessions in the Jonah Building, a glass-faced rented office complex on the east side of Cheyenne.

Scaffolding and curtains shrouded the Capitol during most of the inside-and-out, top-to-bottom work that left the building’s exterior looking pretty much the same. The sleek lines of the nearby Herschler Building, meanwhile, got a classical makeover to look more like Capitol.

The work added 28,000 square feet (2,600 square meters) to an underground corridor linking the Capitol and Herschler Building. Besides adding meeting rooms, the space could allow the addition of an auditorium and visitor center.

The project finished on time and budget but not without difficulties and a few curiosities.

Gordon, while he was state treasurer, sued and ultimately prevailed before the Wyoming Supreme Court to assert his role in overseeing contracting for the project.

As recently as May, workers discovered oil paintings on six vault doors in the Capitol that had been painted over. The elaborate landscapes date to around 1890, soon after the Capitol was built.

“Now we’ve got a foundation that will be here forever,” Harshman said.