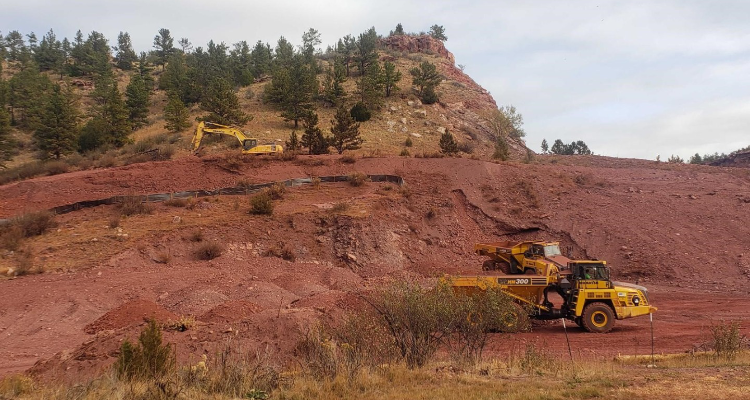 The following article comes from the Wyoming DEQ:

The Powars II Paleoindian Archaeological Site in Sunrise – believed to be the oldest known mining operation in both North and South America – would have been wiped out if former Sunrise resident Wayne Powars hadn’t shown up for a school reunion one day before the scheduled demolition.

In 2019, the Wyoming Department of Environmental Quality partnered with a host of irreplaceable individuals to preserve the 13,000-year-old ochre mine, ensuring archaeologists can study the site for years to come.

Ochre is a powdery mineral that some Native American tribes use as a pigment for a variety of ritual purposes. Ochre comes in a variety of natural colors, but the ochre in Sunrise is red.

Powars first discovered the site when he was teaching and coaching in Sunrise in 1939-40.

But he didn’t report his findings until 1986 when he returned to the town and discovered that the site could be inadvertently razed as part of a project by the DEQ Abandoned Mine Land Program (then under the Land Quality Division) to reclaim the old Colorado Fuel and Iron (CF&I) iron mine in Sunrise.

George Frison, one of the principal archaeologists for the Powars II site said he learned about the site in 1981 when he was completing a fellowship at the Smithsonian Institution in Washington, D.C.

“This man walked in, and he had a sack of artifacts – you know, tools (and) projectile points,” he said.

Frison explained that the man poured them out on the table and said he’d found them all along the railroad tracks between Sunrise and Hartville.

He explained that upon hearing of the possible demolition in 1986, he came to Sunrise, and Powars showed him where he’d found the artifacts.

“Well, we had no idea what was going on, but I knew we had to do something really quick, and I was ready to lay down in front of (a) D17 to stop that thing,” Frison said. A D17 is a type of bulldozer.

Frison said he believes the Powars II site to be the oldest known mining operation in both North and South America.

Frison said his life’s blood has been trying to determine who were the first people to come to Wyoming. The fact that this site contains Clovis points is a big sign.

He explained that Clovis points are a type of projectile point – also known as an arrowhead – that were first discovered in Clovis, NM.

George Zeimans, another principal archaeologist on the site, explained that the people who used Clovis points are believed to be the first inhabitants of North America.

He added that this site is unique not only because it’s believed to be the oldest mining operation on two continents but because of the number of artifacts they are discovering at the site.

Marcia Murdock, the AML project manager who led the reclamation of the Powars II site, explained that although a cultural survey had been done on the reclamation area the survey had not found the archaeological site; DEQ had been unaware of the site until Wayne Powars revealed its location in 1986.

When the AML Program found out about the Powars II site they were in the middle of a project to reclaim and revegetate the abandoned CF&I iron mine.

“The site was in the middle of the project area, but nobody knew about it,” she explained.

Once DEQ became aware of the site, the AML Program completed its work around the site, carefully leaving it undisturbed.

Zeimans reached out to DEQ about doing some stabilization work on the mine to protect the site because he could see the constant erosion. He spoke to Murdock, who immediately understood the importance of the site.

Murdock said, “Now, the archaeologists have got a safe place to work, and they still have what’s left of that entire site in context.”

Frison, Zeimans and others are forming a nonprofit organization to protect the site and help fund the research conducted on the site. The research currently is funded by a private group of collectors and avocational archaeologist, which are nonprofessional individuals with a passion for archaeology.

You can read the article in it’s entirely here.