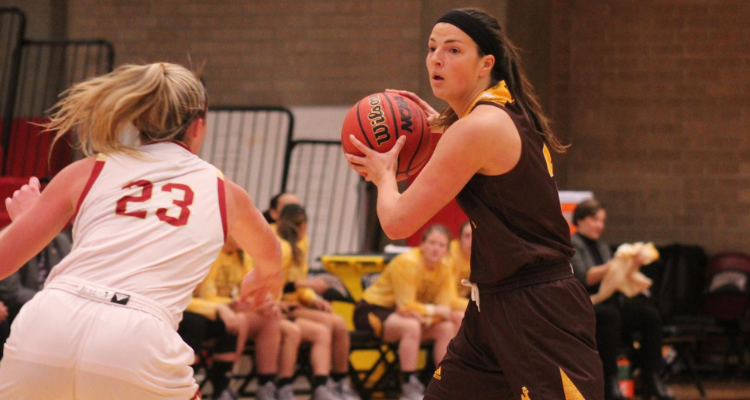 DENVER, Colo.  – Wyoming suffered its first loss of the season at the hands of Denver, 71-57, Thursday night in the Hamilton Gymnasium. The Cowgirls (2-1) struggled offensively in the second half as Denver (1-2) pulled away for its first win of the season.

“Everything that we talked about in the pregame is what happened,” said head coach Gerald Mattinson. “They pushed the ball up and own the court, they cause a lot of problems for us with mismatches and we had some shots not go in that maybe changes the game. We had to try to do some other things, things we’ve never done. I give our kids credit. At the end, we’re playing five perimeter players, and they’re battling. They could have gave in, but we battled, and that’s what you want to do.”

Wyoming started the game on a 7-0 run, thanks to four points from sophomore Tereza Vitulova and a three from sophomore Alba Sanchez Ramos. However, the Pioneers battled back and took a 13-10 lead at the 3:35 mark. From then, the Cowgirls used a 10-0 run, six of which came from freshman McKinley Bradshaw, to go up 20-13 with 1:27 to play. A pair of Pioneer free throws followed by a DU layup had Wyoming with a 20-17 lead at the quarter break.

Denver started the second quarter on a 9-0 run before the Cowgirls called timeout, trailing 26-20 with 7:09 to play in the half. Out of the stoppage, Sanchez Ramos scored a driving layup, but the Pioneers answered with a layup of their own. Back-to-back threes from senior Taylor Rusk and sophomore Quinn Weidemann tied the game at 28, and a layup from sophomore Karla Erjavec gave the Cowgirls back the lead with 5:47 to play in the half. The Pioneers went on a 10-3 run to go up 38-33, before a Weidemann three ended a long scoring drought for UW, but DU scored at the buzzer to take a 40-36 lead into the locker room.

Vitulova scored on the block to open the third quarter, and that score kickstarted a 6-0 run to open the half for the Cowgirls. However, the Pioneers answered with an 11-0 run to regain their lead, 51-42 with 4:18 to play in the third quarter.  Freshman Paige Powell ended a lengthy Cowgirl scoring drought with a layup, but the Pioneers answered to keep their nine-point lead. The quarter ended with Wyoming trailing 57-47.

The teams traded free throws, and a Weidemann three made it 58-51 for Denver, but the Pioneers went back to the line and converted both to regain the double-digit lead with 6:15 to play. After a pair of Denver layups, the Cowgirls called time, trailing 65-52 with 4:31 to play. Redshirt junior Selale Kepenc ended a long scoring drought with a straightaway three, but the Cowgirls trailed 67-55 with 2:20 to go. The possession after Denver converted free throws, they dribbled out the clock, and Denver took the 71-57 win.

Denver was led by Madison Nelson’ double-double with 17 points and 14 rebounds, while Uju Ezeudu had 12 points, and Jasmine Jeffcoat had 16 points and five boards.

The Cowgirls are back in action on Sunday, Nov. 17, when they host Colorado in the Arena-Auditorium for a 1 p.m. tip.