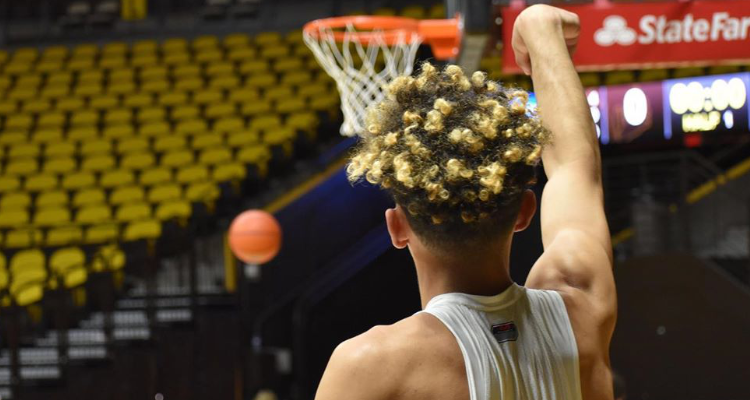 LAS VEGAS, Nev. – The Cowboys struggled from the field in a 64-47 loss to TCU on Tuesday Evening in the Third-Place game of the MGM main Event in T-Mobile Arena. The Cowboys former Mountain West rival connected on nine three pointers on the night on their way to the win.

“What I told our guys after the game is it is about trusting what we do offensively and hanging our hats on the defensive end of the floor,” UW head coach Allen Edwards said. “We tried too hard in the first half offensively. We need to trust each other offensively to get the right shots. We struggled guard the three point line in the first half and that is what hurt us.”

The Cowboys were led by redshirt sophomore Hunter Maldonado with 13 points on the night. He has scored in double figures in every game this season. He also led the Pokes grabbing seven rebounds. Senior Jake Hendricks added 14 points and connected on four three pointers for the night. He finished with six rebounds.

“We played some tough games this season winning some and losing some, but I’m disappointed tonight,” Edwards said. “We need to play hard, play with toughness and play together. We over dribbled and tried to make somethings happen that weren’t there.”

Both offense started slow in the early goings, but the Horned Frogs got the early advantage at 5-2 in the opening four minutes of the contest. TCU would go on a 13-0 run following a bucket by Maldonado to take an 18-4 lead with 10:24 left in the first half.

The Horned Frogs would hit their sixth three of the game to take a 26-11 advantage on the Pokes with under seven minutes remaining in the first frame. The Pokes offense would go cold from there being held scoreless, as the Horned Frogs would take at 30-14 lead into the half.

Hendricks warmed up to open the second half with a pair of three pointers to make it a 34-20 contest with 18 minutes left. TCU would go on a 6-0 run making three-straight baskets to build a 40-20 advantage with 15:59 left.

The Pokes responded with a 7-0 run to make it a 40-27 game with just under 15 minutes left. Maldonado added four points with Hendricks hitting his fourth three pointer of the game. The Horned Frogs held the Pokes without a basket for over three minutes and built a 50-31 lead with under 10 minutes remaining.

Sophomores Brandon Porter and Greg Milton III would give the Pokes a spark off the bench fueling an 11-0 run by the Pokes to make it a 60-47 game with under three minutes left. The surge was too little too late though, as the Horned Frogs took the contest 64-47.

TCU was led in scoring by Desmond Bane with 22 points and added a team high 11 rebounds for the double-double.

The Cowboys return to action on Wednesday opening up Mountain West play against Air Force at 7 p.m. in the Arena-Auditorium.