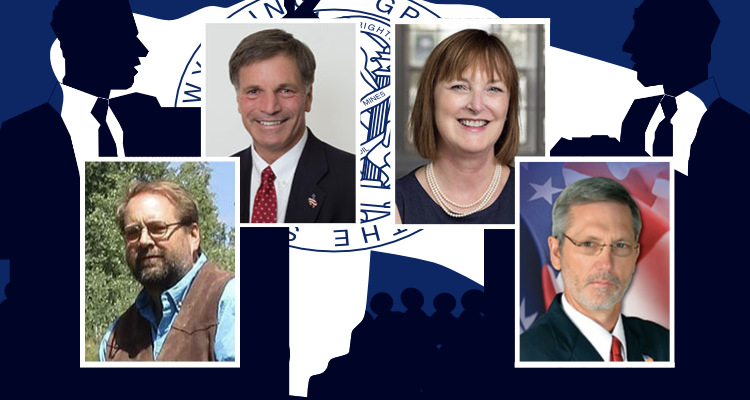 LARAMIE, WY. – All four candidates seeking the office of Wyoming governor will debate Thursday, Oct. 25, at the University of Wyoming. The event is free and open to the public.

Gordon is a rancher, small-business owner and currently serves as Wyoming’s state treasurer, a position he has held since 2012. He grew up on a family ranch in Johnson County and, together with his wife, Jennie, continues to ranch outside Buffalo. He graduated from St. Paul’s School, an Episcopalian boarding school in Concord, N.H., and Middlebury College in Middlebury, Va.

Throne was born and raised in Campbell County, growing up on a ranch on Wild Horse Creek. She has a bachelor’s degree in history from Princeton University and a law degree from Columbia Law School. The Cheyenne attorney is a former assistant Wyoming attorney general and spent more than 10 years representing Laramie County in the Wyoming Legislature.

Rammell, who grew up in the mountains of western Wyoming and eastern Idaho near Yellowstone National Park, is a licensed veterinarian. He and his wife, Lynda, own Sweetwater Stables in Rock Springs. He has a doctorate in veterinary medicine from Kansas State University, a master’s degree in animal science from Utah State University and a bachelor’s degree in animal science from the University of Idaho.

Struempf, a Laramie County Community College computer information systems instructor on the Albany County campus, grew up on a cattle ranch near Pavillion. He earned a bachelor’s degree in computer science and a doctoral degree in instructional technology, both from UW; and a master’s degree in management from Regis University. He lives in Laramie with his wife; they have four children.

The Political Science Club and the UW debate team are hosting a “Crash Course on Wyoming Politics” for UW students to prepare them for the gubernatorial debate. The course will be Tuesday, Oct. 23, at 6 p.m. in Room 214 of the Classroom Building.