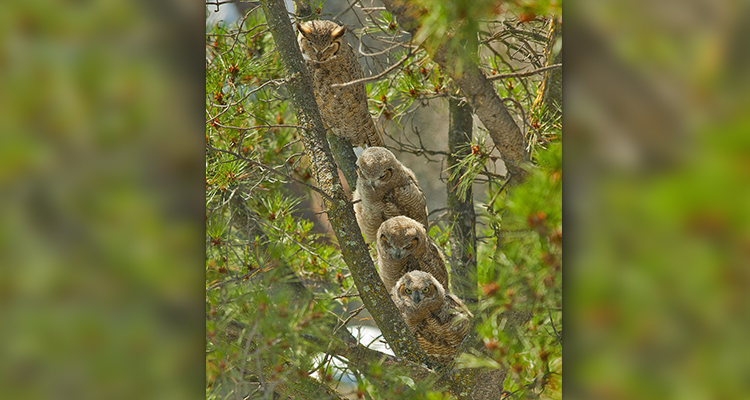 The Teton Raptor Center in Jackson Hole took in 19 owlets last week from three separate clutches, broods of young owls, all within 24 hours. All of the baby owls were from around the Idaho region.

The Teton Raptor Center usually houses no more than 18 injured, orphaned or ill birds of prey at any given time, and it suddenly had 27 different raptors type birds of prey on its hands.

“It’s not uncommon to get clutches, but it is uncommon to get three at once,” Teton Raptor Center Rehabilitation Director Meghan Warren said. “This is a record breaker in many ways.”

The rush of baby owls started with a call to the center last Thursday from the Idaho Fish and Game Department. They had acquired a six-bird clutch displaced when a hay bale was moved. The next day two more barn owl clutches were recovered in the Idaho Falls area and sent to the center in Wilson.

Staff at the center are planning to transplant the owlets into eight or nine different known barn owl nests in the region. For obvious reasons, dumping 19 little owls onto one pair of adults isn’t a good option.

“What we’ll do is we’ll put these babies into a few different nests,” Warren told reporters.

“Young raptors do best when raised by wild parents. The best case scenario is that we can place these 19 babies into 8-9 active ​B​arn ​O​wl nests. That way, the wild parents aren’t overwhelmed, but the youngsters get a wild upbringing,” said Warren, Rehabilitation Director at Teton Raptor Center. “We need help finding nests as soon as possible.”

Barn owls are a particularly good species for fostering parentless younglings. They typically lay eggs at different times, and then simultaneously raise their young of various sizes with each other . One of the Teton Raptor Center’s current clutches, for instance, includes owlets ranging from 2 ounces to 1 pound.

“In not too long, the older ones are going to be starting to fly, and they’re not going to stay in the nest box,” Warren said. “If we can’t find nests, what we’ll do is we’ll raise them here. We’ll give them lots of opportunity to practice hunting on wild mice, but once we let them go, they’re on their own.”