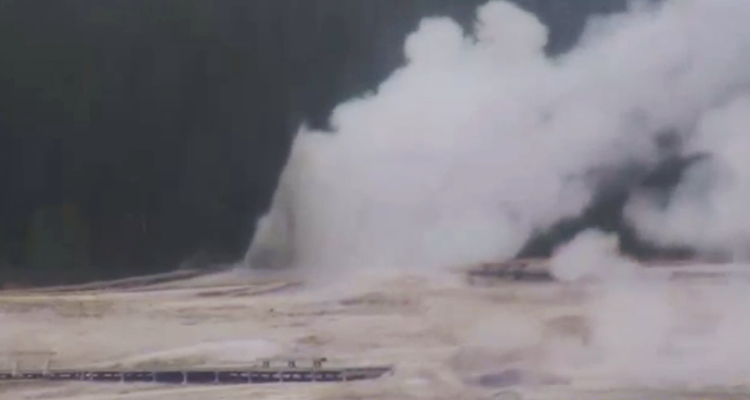 YELLOWSTONE NATIONAL PARK | By MATT VOLZ (AP)     –     A thermal spring near Old Faithful in Yellowstone National Park has erupted for the fourth time in the last 60 years, a park official said Thursday.

Ear Spring on Yellowstone’s Geyser Hill went from being dormant on Saturday to spewing steam and water between 20 and 30 feet (6 and 9 meters) high, a height not recorded since 1957, said park spokesman Neal Herbert. It has since continued to erupt at a near-constant height of about 2 feet (0.6 meters), he said.

Ear Spring, named for its resemblance to the shape of a human ear, is one of dozens of geysers, pools and hot springs in Yellowstone’s Upper Geyser Basin — among the park’s top attractions that feature the popular Old Faithful. It last erupted in 2004.

The eruption is among the new thermal activity seen over the last several days on Geyser Hill, just across the Firehole River from Old Faithful.

The activity includes new erupting vents and surface fractures, and it has led park officials to close a boardwalk in the popular Upper Geyser Basin to prevent people from being injured by scalding water splashing on the popular boardwalk trail.

Yellowstone’s thermal basins sometimes undergo significant changes in short amounts of time, but the new eruptions are not a sign of impending volcanic activity, Herbert said.

The changes are continuing and could lead to new or different closures in the basin, he said.

“It’s still in flux,” Herbert said. “There is still water flowing in new places and some of the springs that had been dormant have been erupting nearly constantly.”

Ear Spring isn’t the first dormant geyser to come to life this year. In March, the world’s largest active geyser began the first in a series of eruptions for the first time since 2014.